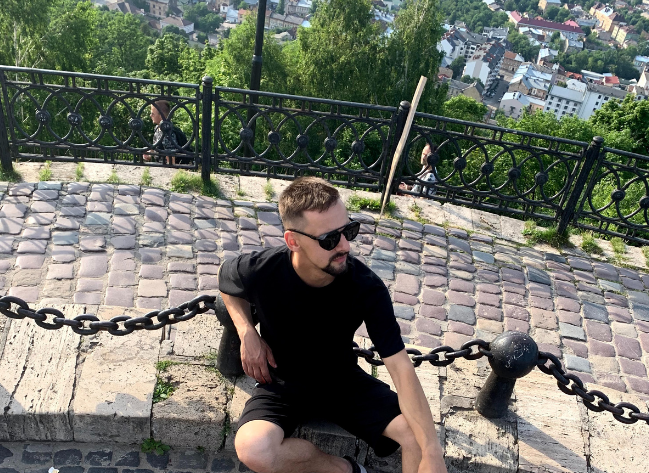 Yevhen Pavlov’s story is a brilliant example of how someone’s life can change after a single conversation. And how coaching often leads to quite unexpected results. He talks about how coaching influenced this community activist from Konotop.

Yevhen is a member of the board at International Institute for Community Development, a CSO. Until not long ago, he ran a project to develop public budget technology in Konotop. At that point, he did not understand that he was not in the right place and was doing something that did not suit him. The pandemic had a significant impact on this as well.

“I suddenly had more time that I could devote to personal development and to finding out who I really was, and coaching helped a lot here,” Yevhen recalls.

While working with a coach from the Coaching Programme which is a part of the EU-funded project implemented by East Europe Foundation “3D Project: Development Despite Disruption”, Yevhen began to question himself, for the first time, why he was making this or that choice in life. “I realised that I kept getting involved many things simply because I didn’t know how to say ‘no,’” he admits. “I kept convincing myself that if I didn’t know something, I had to definitely give it a go. I approached everything rationally—yet, at the same time, I was being dishonest with myself.”

In addition to this, Yevhen came to the coach with some issues in communication, which had changed significantly during the pandemic.

“How you get information is pretty limited in chats and Messenger, because you don’t hear the intonation of the person’s voice and you don’t see their mood, yet you have to accept what they are telling you at face value and respond to it accordingly,” he recalls. “We talked with the coach about how I reacted to this internally and what I should do with it.”

Yevhen has been engaged in community activity for the last four years but only now has he realized that he was brought to this by sheer happenstance. In the process of being coached, he was able to identify what is truly meaningful to him and which path he should take going forward: “It’s a shame, but it turns out that the path that I was following so far was not the one I really want to be on.”

He explains that he never asked himself the questions that came up when he was working with the coach and was thus profoundly surprised by the “metamorphoses at the fundamental level” that began to take place. “Turns out that this experience overshadowed everything that went before, in terms of significance,” says Yevhen. “In this program, I came to a point that I had needed all my life.”

Participating in the coaching program gave Yevhen more clarity and self-awareness about how to develop. Yevhen’s coach Olena Trehubenko explains that his first request was how to properly prioritize and combine various areas of activity.

“And when we started working, it turned out that the main issue was something else,” she says. “It was how not to run in circles like a hamster in its treadmill but to stop and listen to himself.”

After an open chat at a coaching session, Yevhen decided to leave the civil society sector. He says his colleagues weren’t especially surprised. They already knew his views of his own development and understood that, sooner or later, this would happen. “I don’t want to just say good-bye,” says the activist. “If they ever need it, I will be happy to help. But for now my plan is to be less and less involved once the project I’m in charge of ends.”

Coach Olena Trehubenko says that Yevhen’s decision to change his field of activity did not surprise her, either. The purpose of the 3D Project’s Coaching Programme is to shore up CSO teams during the pandemic but it’s very difficult to predict what will happen with a given client. The goal can shift during the process of working together. “If he were to stay in the organisation and keep working without motivation and desire, that would not be good for the project,” notes Olena.

For Yevhen, the project gave him an opportunity to listen to himself, to his own needs and desires, and, in the end, to finally hear himself. He admits that, until now, he had never had the opportunity to do so, nor did he have a vision of who he wanted to be in 5-10 years.

After working with a coach, a pathway forward began to emerge. Yevhen is convinced that this process will bring him to a new environment, new skills and preferences, and a revision of his priorities.

“I was able to use this litmus paper to see what was me and what wasn’t, what I really wanted and what I didn’t,” says Yevhen. “You’d think that a few conversations with a coach is just a grain of sand against the background of an entire lifetime, but it gave the impulse to internal changes that have already led to a tectonic shift and will lead to further external changes.”

Coaching prompted Yevhen to take a bold step and admit to himself that it was time to choose a different path. This new path is programming, something that he had thus far treated merely as a hobby. But Yevhen understood that this was something he wanted to do more and in greater depth.

Aside from this, he completed a marathon of daily meditation, signed up for a course in English, and started training in crossfit. “The coach and I came to the conclusion that I need to do more things that help me to feel, listen to and recognize myself,” says Yevhen. “I know that my path is only beginning but I’m really happy about the changes that I’ve seen so far.”