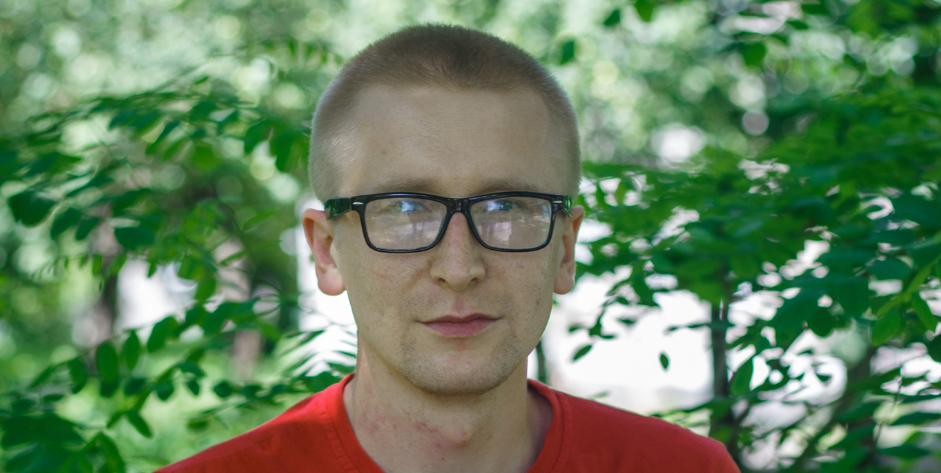 Viktor Smoliak, an activist from Ternopil Oblast, works in a library and is involved with youth initiatives. He approached the Coaching Programme for CSO leaders wanting to figure out how to combine these two activities — and here’s what happened.

Viktor Smoliak works as a designer and communications specialist at the Insource Centre for the Development of Initiatives. When he found out he could get support from a coach under the East Europe Foundation’s 3D Project, supported by the EU, he decided that this could be a great opportunity to look at his own activities from a different angle. “I understood that this could be very useful, both in my personal development and in the development of our organisation,” he recalls with a smile. “But participating in this programme exceeded my expectations by far!”

Viktor’s main place of work is the library, and in his free time he helps with the initiatives of the public organization. He explains that he often ends up being overextended as a result and it’s very hard to switch from one task to another, to finish everything on time, or to ask one of his colleagues to help. Until this point, he’d always done everything himself. Even when there really wasn’t enough time or opportunity. Viktor found it extremely difficult to get someone else’s help.

“I was used to taking on more so that others wouldn’t be overloaded,” recalls Viktor. “Yes, I was afraid to delegate but I only began to understand this while working with the coach”.

Another challenge that he came to the coach with was procrastination. Because of the large number of minor tasks for which there was never enough time, Viktor often chose to postpone them to the last minute.

The 3D Project’s Coaching Programme made it possible for community activists to overcome those challenges raised by the pandemic as well. Insource’s main work is organizing events. Viktor explains that because of COVID-19, the Insource team was forced to radically change its approach to communication and coordination, and to rethink how to implement what they had planned. The NGO’s main work is organising events.

How to make them high-quality and timely while remaining in compliance with all quarantine restrictions became yet another task. “The hardest thing was to change our approach so that we could still hold these events while making sure that the safety and health of all those attending was taken care of,” says Viktor.

After working with a coach, Viktor returned to his colleagues with new skills in how to properly manage time in order to work more efficiently and productively.

“When you don’t see any results for a long time, then it’s not so easy to carry out the same routine work, day after day,” he admits. “But now I understand that we actually need these minor tasks to be handled well so that our organization can function self-sufficiently, given the constant flow of projects, and reach a new level.”

At this time, Insource supports local initiatives for the residents of small communities in Ternopil, Rivne and Khmelnytskiy Oblasts. Viktor is confident that the organisation can engage more new people and manage a larger number of projects. And for this, the daily routine of what seems, at first glance, “trivial” work is extremely important.

The activist’s dream is to see the geographic reach of the CSO’s projects to expand and opportunities for team development to grow. He says that, for now, he’s having a hard time motivating others, but he has already set the goal for himself, which has energized him: “I don’t want us to sit in the same spot with a single project.”

Participating in the coaching programme made Viktor understand where he needs to go and the confidence to go on his own path. Coach Olena Trehubenko, who worked with him for several months, notes: “At first I had the impression that he had a hard time saying ‘no,’ that outside circumstances often took precedence over his own will and goals.”

But they were able to overcome this during the coaching process. “Viktor was able to set priorities, to put together his own strategy and to find support within himself,” Trehubenko recalls.

“The anxiety—and the feeling that everything was going not the way it should have—disappeared. He saw that he often set up challenges for himself and began to look into these as resources for personal growth. He has gained confidence and peace of mind, understanding that he owns the situation and is on the right track.”

Viktor himself says that, since working with the coach, he has become more productive and has started taking on those tasks that he had long been tossing into the “not now” basket. One example is putting together a brand book for his NGO. The activist explains what has led to these changes.

“I began to understand how to manage my time properly, to not take on too much, and to carry out what was planned, step by step,” says Viktor. “Coaching showed me how to think differently and it’s starting to work.”

Learning to plan his time differently really helped Viktor to see new opportunities for himself. In addition to design and communication, he now wants to develop skills as a facilitator. He already has some experience in running workshops and he remembers enjoying it, so he wants this to be the next rung on the ladder of his own personal and professional development. What’s more, he adores photography and plans to start exhibiting again, both in the context of his Insource activities and beyond them.

Last but not least, Viktor wants to work full-time in the NGO. “Everything starts small,” he concludes. “Now I’m trying to set a goal for myself and work towards it with a proper understanding of its prospects and the more interesting projects that it might offer.”