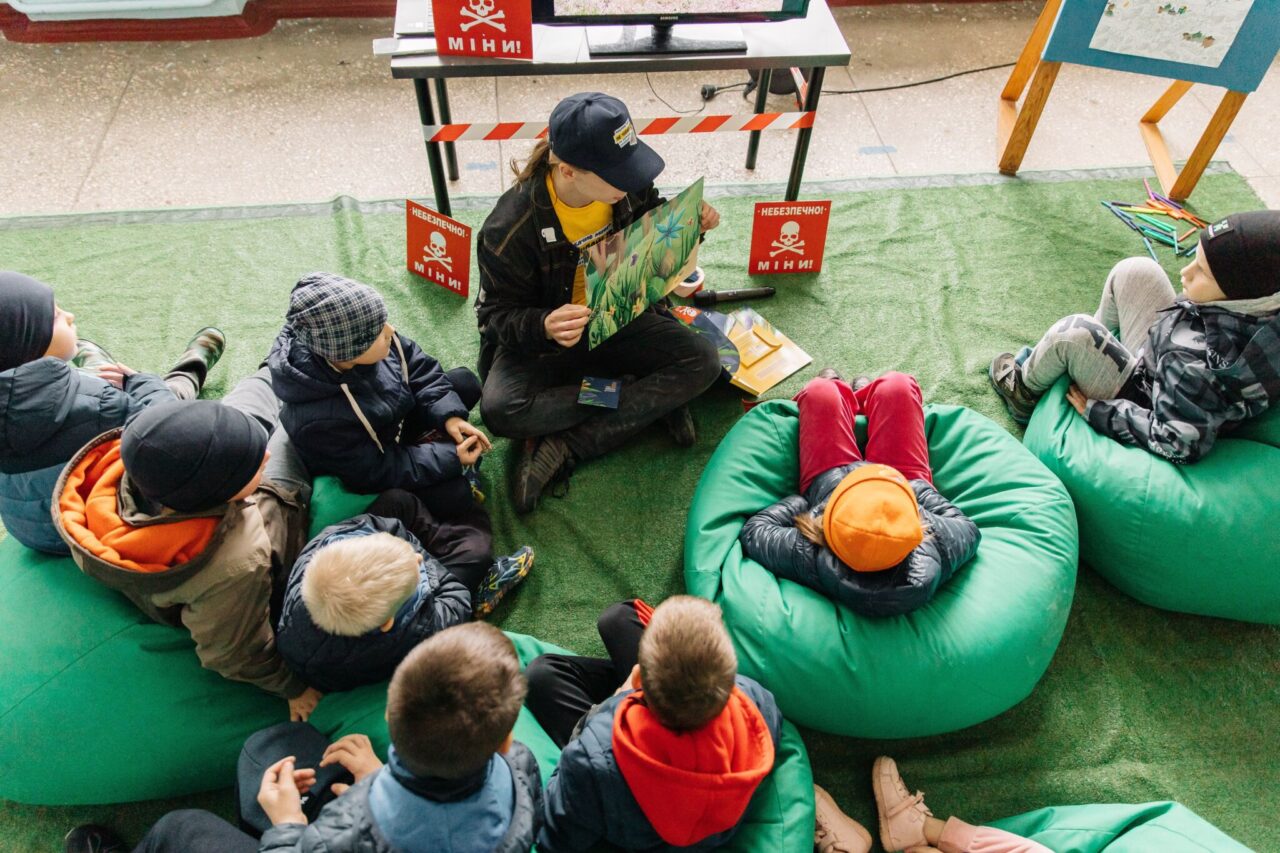 There can never be too much safety. Therefore, we are constantly searching for new formats and opportunities to tell citizens as much as possible about the rules of safe behavior with mines. This time we have joined efforts with CF Kitty Soloma.

Thus, on September 22, Landmine Safety Week. North started as a joint project of East Europe Foundation, Charitable Foundation Kitty Soloma and the State Emergency Service. This is the format of field lessons conducted for both adults and children in cities and towns of Ukraine. And we decided to start it from the capital city.

Large white tents with heaters and hot tea were set up in Taras Shevchenko Park in Kyiv. About 100 people willing to attend a free landmine safety lesson gathered there. Experts from the State Emergency Service explained and showed what explosive ordnance looks like and how the russian enemy can set deadly traps using such munitions. Of course, the instructors also talked about what to do when a suspicious object is discovered.

A special area for children was set up separately so that experts can explain to children in a playful way how to behave with dangerous objects and how a metal detector actually works. The most active children were even offered to try on the deminer’s helmet and body armor to take a photo.

“When playing games with children, we use only dummies and device mock-ups. And in no case do we give them in their hands so that children can develop the skill not to touch suspicious or explosive objects in real life,” says Valentyn Maidanyuk, Project Director at CF Kitty Soloma.

The first lesson of the Landmine Safety Week. North in Kyiv was visited by the team of DanChurchAid organization led by the general secretary Birgitta Kvist-Sorensen. They are our trusted partners and donors, due to whose support we are able to conduct such activities for Ukrainians.

“I am very sorry that such events are currently taking place in your country. But still, it is extremely important that today, despite the war, so many visitors have come here who are really interested in this topic. Moreover, it is quite valuable to see here not only adults, but also children, who can learn in a playful way… This way you save lives,” said Birgitta Kvist-Sørensen.

Viktor Liakh, President of East Europe Foundation, also attended the event together with our team. Delivering his comments, he congratulated the volunteers from CF Kitty Soloma on the excellent start of the Project and thanked them for supporting such an important mission.

“We are convinced that now literally every Ukrainian should know the basics about landmines and how to deal with them. And, of course, the role of public organizations, such as yours, is simply extraordinary… Today we saw a very cool new format of work with youth, with families, with children, with parents. When you can talk to children and parents at the same time, when you can show what dangerous objects look like and what to do with them. I really liked the informal approach to learning, which has certainly proven to be the most effective one. And I also liked the creativity and passion in the eyes of your team,” Viktor said.

It was not long before the same field lessons were conducted in other cities of Ukraine. Recently, the Kitty Soloma team has managed to visit Sumy, Trostyanets, Okhtyrka and Chernihiv, Borodyanka and Slavutych with mine safety lessons. It means that another few hundred adults and children were educated about landmine safety! Children and teachers received not only valuable knowledge, but also were presented with gifts such as educational and entertaining books Riddles on the Topic of Mine Safety from UNICEF Ukraine and the merch with dog Patron from East Europe Foundation.

We would like to remind you that the landmine safety training is absolutely free for everyone who wants to take it. All you need is your desire and focus. So follow the news and announcements on the webpages of East Europe Foundation and Soloma Cats and be sure to learn more about the rules of safe behavior.

Landmine Safety Week. North was conducted as part of the Watch Your Step! Program, which is implemented by East Europe Foundation in partnership with the State Emergency Service with funds from DanChurchAid.