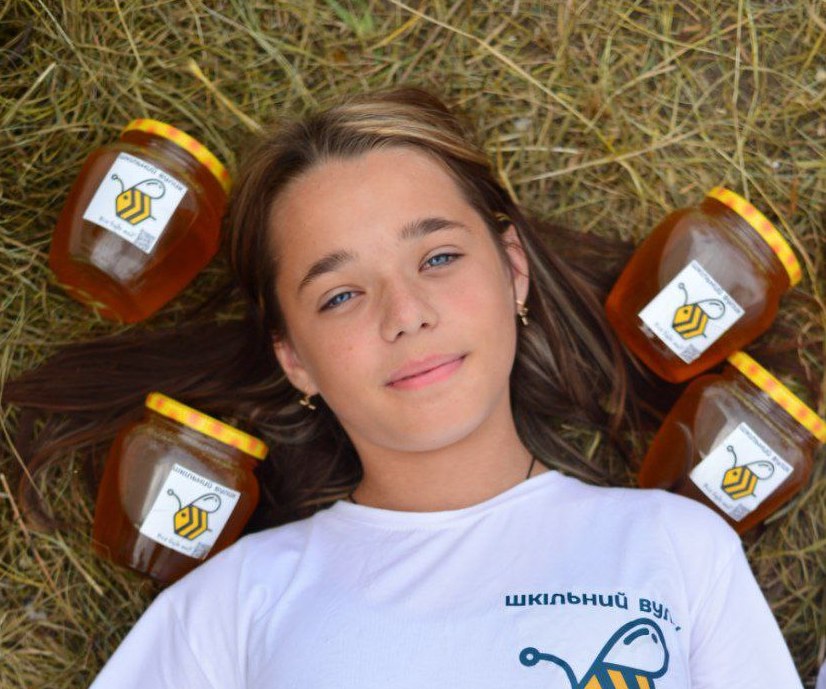 The Program “Establishment of social school enterprises in rural areas and small towns of Ukraine to encourage young people to social entrepreneurship in Ivano-Frankivsk, Zhytomyr and Donetsk regions” was implemented by East Europe Foundation under the support of ChildFund Deutschland e.V and Federal Ministry of Economic Cooperation and Development of Germany during 2019–2021.

Kateryna Sluhovyna is in Grade 9 in the Zavorychi School in Kyiv Oblast. Katya loves the vocational classes and knows how to come up with creative content for her social pages. Today, she’s also the manager of a PR service called the Shkilniy Vulyk [School Beehive] social school enterprise.

The story of the Shkilniy Vulyk in the village of Zavorychi starts in March 2021. At the time, the Nashi Kroky [Our Steps] community organization applied, together with some pupils, for a grant from the East Europe Foundation. The team wanted to set up an enterprise that would specialize in beekeeping at their school. The Foundation liked the idea and approved the grant.

“Things were very boring under the quarantine,” Katya recollects the beginning of her own involvement in the project. “I sat on the phone all the time and didn’t know what to do. So when I saw a notice in the school chat about this project, I immediately decided to check it out.”

With the money from the grant, an apiary was set up in the schoolyard with six hives. Shkilniy Vulyk not only collects and sells honey, but it also holds master classes in candle-making, organizes honey-tasting directly from the combs, and travels to other cities and villages to promote its products.

What’s unique about social school businesses is that all the positions in the enterprises go to kids. Right now, 15 pupils are involved in the Vulyk. Grown-ups act only as guardians and mentors. This way, the young people pick up new knowledge and skills: how to generate business ideas, how to analyze a market, how to set up the structure of an enterprise, how to select staff, and how to organize the production and sale of products. In addition, of course, they pick up a lot of “soft” skills: communication, conflict-resolution within a team, and more.

Kateryna is responsible for promotion at the School Beehive and she does it mostly through the social nets. “When the project was just beginning, we needed to spread the word about it in different local Facebook groups, to inform as many people as possible and to generate ideas for photos,” the schoolgirl explains. “For instance, when we were collecting the honey, we thought about how to show the process so that people would be interested in looking at our pictures. For me, the most enjoyable was probably coming up with ideas. You come up with a concept, then you see the result—and you have no idea that you were capable of thinking up something like that.”

The kids want to spend part of the company’s profits to help the schools. So far, they plan to refurbish the gym and buy modern equipment for the chemistry lab. Some of the money will go to the Nadia Boarding School, where orphans and kids whose parents have lost their rights study.

Their plans also include setting up the first offshoot of the Shkilniy Vulyk at another of the schools in their amalgamated community, in the town of Kalyta, where they will organize a bee building. This will allow the practice of apitherapy as prevention and treatment for the elderly and participants in the ATO with the help of the vibration of a bee swarm.

So far, this idea has found support at the International Renaissance Fund: the IRF has indicated that it will co-finance on condition that the Shkilniy Vulyk picks up half the money it needs through crowdfunding. In fact, in just one week on the Spilnokoshty site, they brought in UAH 13,000 of the UAH 50,000 needed.

What exactly does social entrepreneurship at school give kids? Katya thinks that, by participating in this kind of project, kids begin to understand what’s a market and they find out things that they typically would never hear about in class. They learn to work together, to come up with goals, and to achieve them. “This is nothing like sitting at home—it means not being lazy and getting results,” says the ninth-grader. “Half a year ago, I never thought that one day I would go to a studio and give a live interview on air.”

Until not long ago, the practice of setting up social enterprises at schools was poorly known in Ukraine. The program that the East Europe Foundation has been running for the last two years is one of a handful that has made a noticeable contribution to the popularization of this concept in Ukraine.

Thanks to our support, 18 social firms have been established in different parts of Ukraine. For pupils in Grades 8 through 11, we’ve put together a learning program for an elective course called “Social school entrepreneurship” that has been approved by the government for public schools. The course includes a handbook called “Social School Entrepreneurship: Your first start-up.” Moreover, the Zrozumilo! [Got It!] educational platform has two courses about how to set up school companies: one for the students and the other for teachers.

As a mid-project poll run by the EEF in February 2021 showed, nearly 84% of pupils participating in the program said that the knowledge they had gained during the course of the projects for setting up school enterprises would be useful in their everyday lives. And 85% of teachers were prepared to keep supporting the work of the newly established companies.

“After I finish school, I’m definitely going to go back the apiary to meet up with the gang,” says Katya. “After all, this isn’t just learning about marketing or doing business. It’s also about socializing and making new friends. I saw how cool the members of our team were and we began to really become friends.”