“What gives us the strength to remain resilient? – Faith in ourselves and in victory” – CSOs answer

In early November, representatives of civil society organisations from different parts of Ukraine gathered in Lviv. A week of training sessions, practical team tasks and networking – together they reflected and worked out what gives strength to remain resilient during the war.

The offline training “CSOs’ work in times of war: how to overcome challenges” was organised by the East Europe Foundation within the framework of the Stiyikist’ Programme at the Ukrainian Catholic University. The aim of the programme is to strengthen civil society organisations, as well as public activists and media in Ukraine affected by the war.

“Our programme is called “Stiyikist'” (Resilience) for a reason,” said Vira Nedzwiedska, manager of the East Europe Foundation, – the motto of this training: “Our resilience leads us to victory”. And I believe in it. Ukrainians, in particular civil society, continue to work and really bring our victory closer by all means. We all do what we can. Each and every one is in its place.” 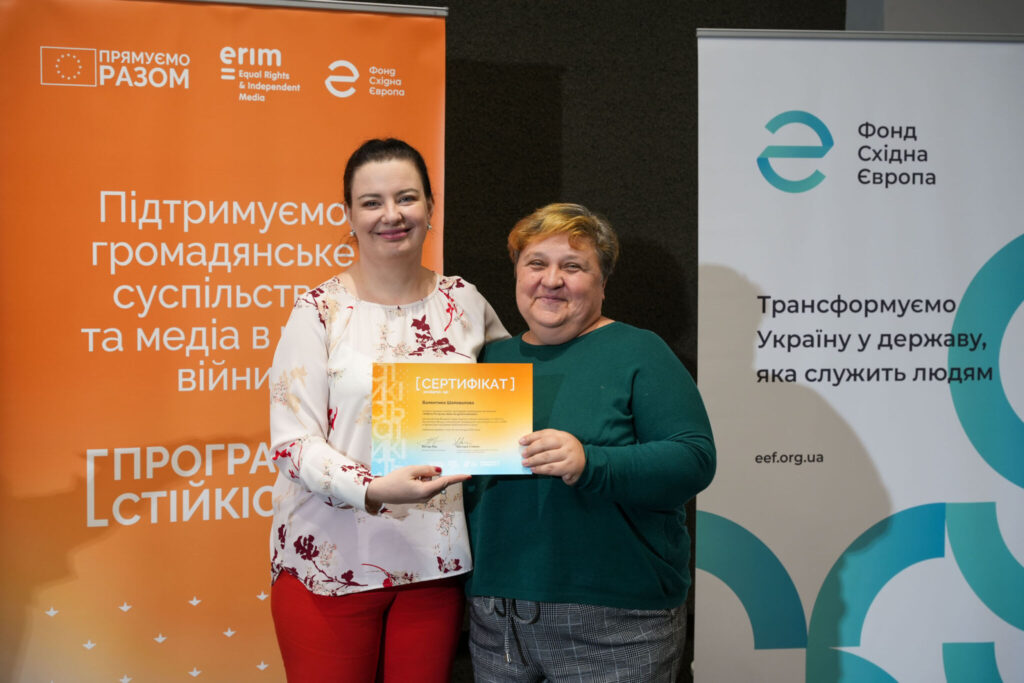 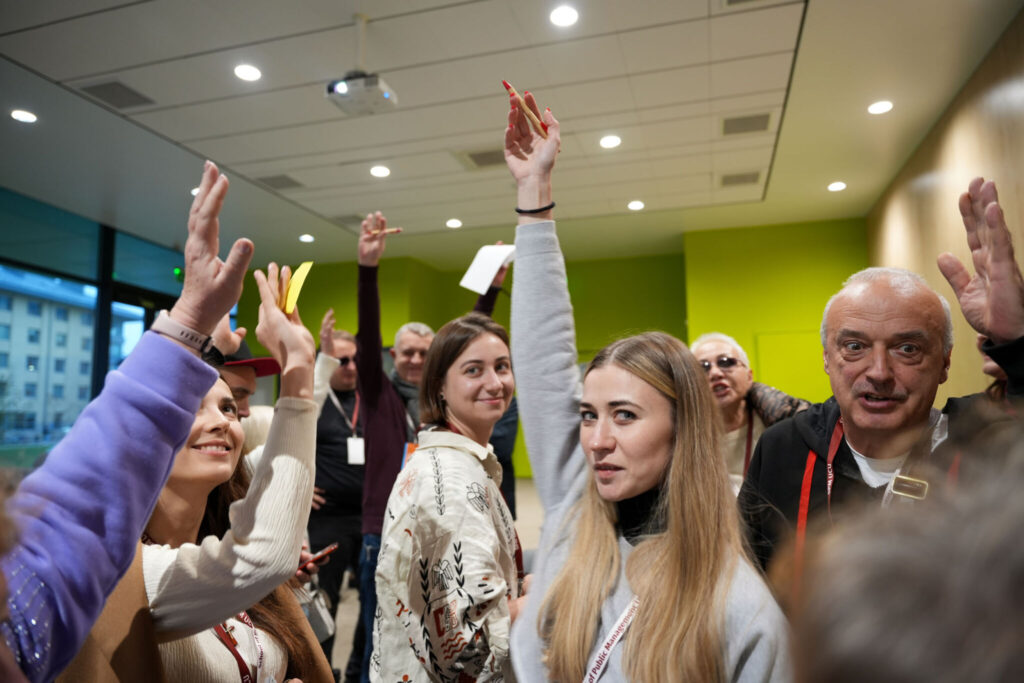 During the week, about 60 people listened to lectures from invited experts. They talked about organisational development and values, principles of effective communication, advocacy and decision analysis, project monitoring and change management. They also practised art therapy methods of dealing with stress. They analysed their own projects and partnerships, got to know each other and even thought about common intentions in the future, despite the challenges of reality.

“The war has become an important factor in the development of civil society,” comments Yevhen Hlibovytskyi, an expert on long-term strategies, “On the one hand, it has put a serious burden on all active citizens, because the protection of the country is now everyone’s business. It became clear that without total involvement of Ukrainians it will be impossible to win. The war also showed the importance of specialisation and state institutions. The war demonstrated not only that you need to be active, but also that you need to be active in connection with others. It is an introduction to a complex subjectivity – each side begins to understand where the boundaries of responsibility are and the unique roles that each has to play depending on their capacity and training.” 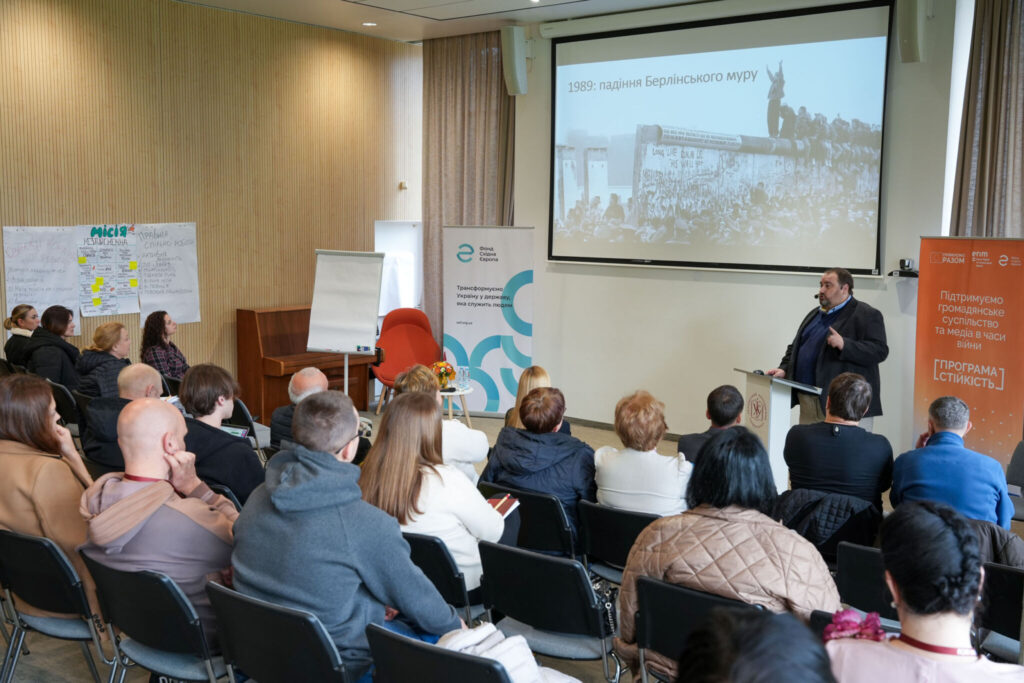 The participants of the training listened to lectures about organisational development and change management, in particular leadership in the conditions of change and transformation, and practised with Andriy Rozhdestvenskyy, a lecturer at the UCU Business School (LvBS), a consultant on business and organisations. According to him, the defining component of leadership, in addition to competence, is the character of the leader, and therefore the development of this character.

The team first of all looks at what the leader does, said training participant Andriy Shchekun, head of the CSO “Crimean Center for Business and Cultural Cooperation “Ukrainian House”, which employs only Crimeans who were forced to move from their homes in Crimea to mainland Ukraine.

“The most stable thing for me is faith,” says Andriy Shchekun, “I have never despaired. It is clear that you need to have skills, knowledge, and mechanisms for implementing your projects, but without faith it is very difficult to do.”

Mr. Rozhdestvenskyy is convinced that an organisation is sustainable when its leader is confident – thanks to his faith and the knowledge and experience he has gained. 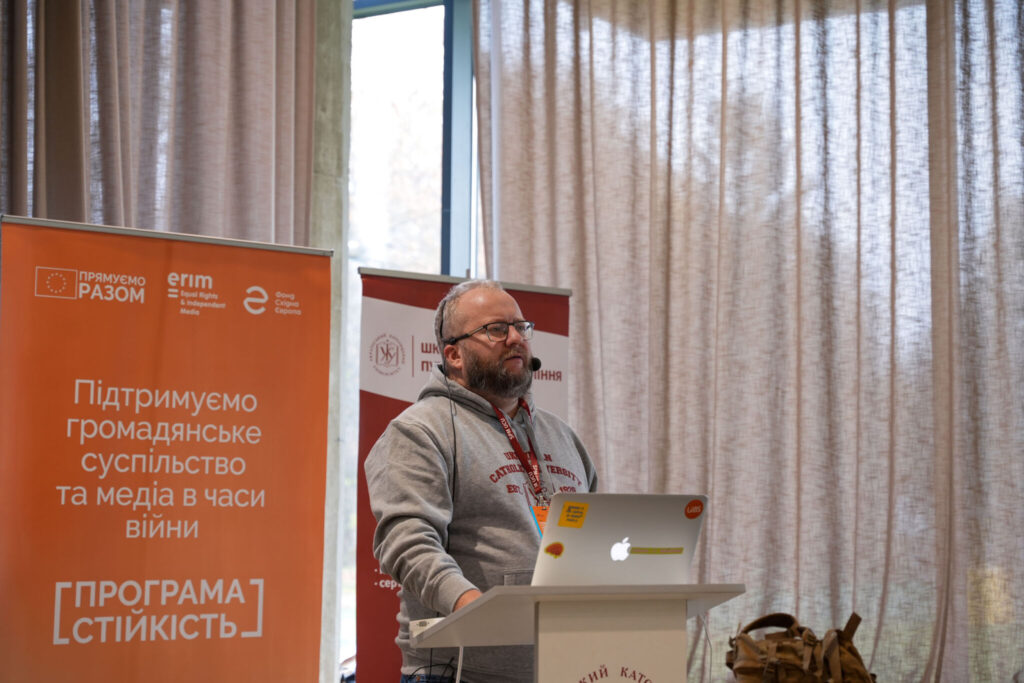 For organisational development, Andrii Rozhdestvenskyi advises to understand what parts your organisation consists of and figure out how to manage these parts to make the organisation harmonious

To be known, trusted and recommended

One of the days of the training was fully devoted to communications. It was about the principles of effective communications, communication strategy, stakeholder relations, work with target audiences, etc. 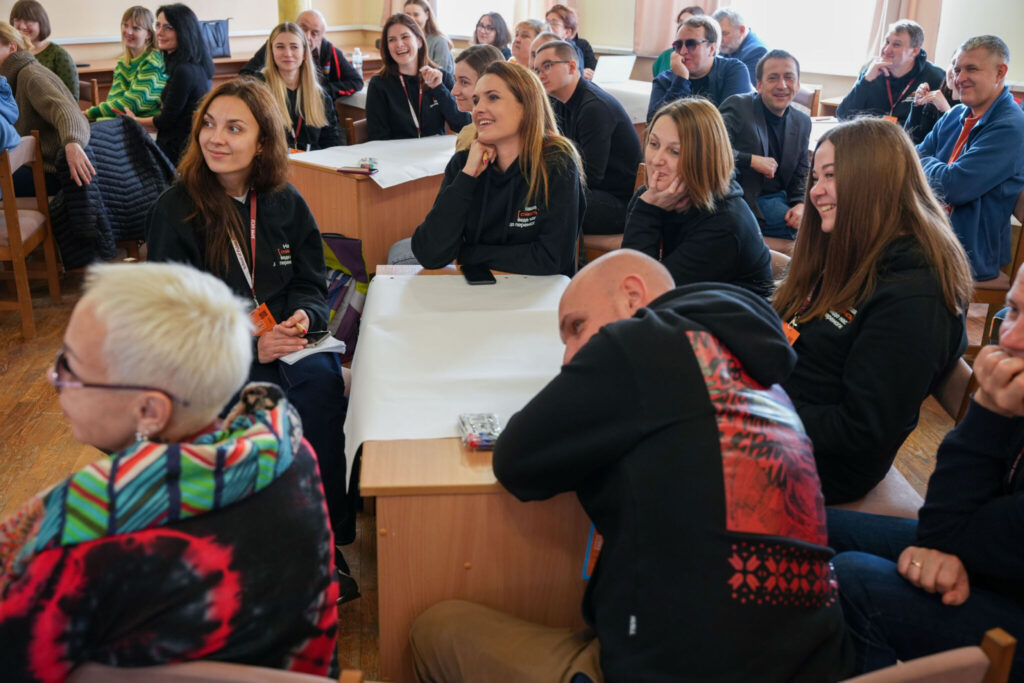 “Communication is effective when it is systematic, evidence-based and engaging,” said Iryna Titarenko, communications expert in the non-profit sector, lecturer at the Kyiv-Mohyla Academy. It is important to communicate your projects and the work of the organisation now, as always, because: “Inaction in the information field is equal to no activity at all”. 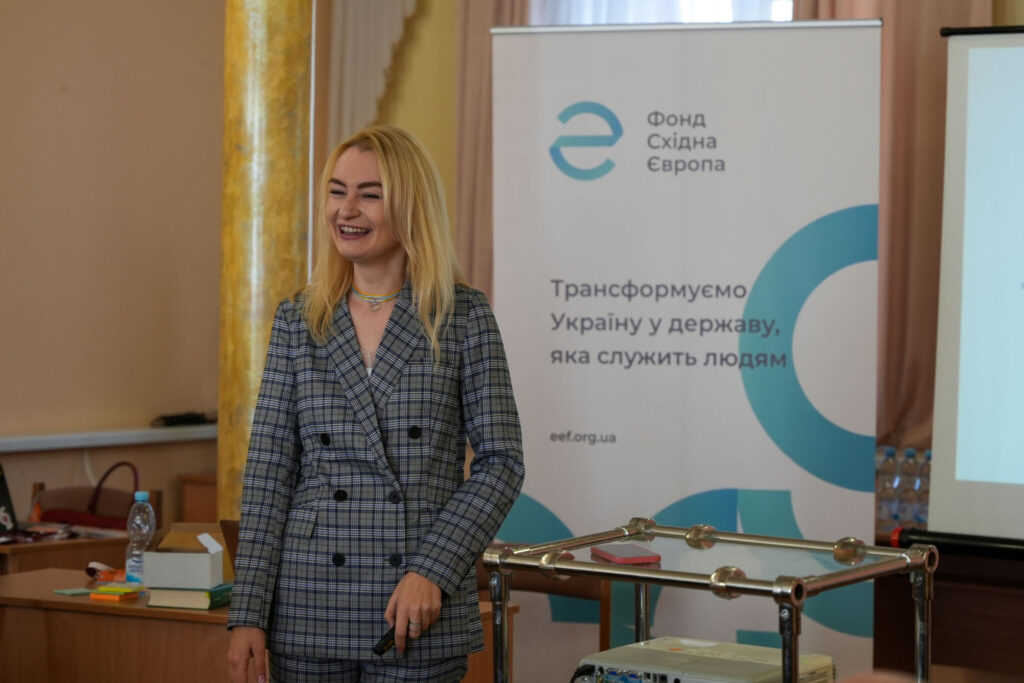 It is also important to remember about internal communications: talk to your team regularly and often. Special attention was paid to collaborations, partnerships, and coalition building.

They also talked about digital communication tools. Thus, in posts for social networks, Ms. Iryna urges to avoid, especially in times of war, blame and guilt, which, according to her, only widens the gap between you and your audience and even divides the society.

While caring for others, we should remember about ourselves

It should be remembered: it is necessary to take care of yourself in times of crisis, because it gives strength and resources to continue your journey. Oleksandra Hlizhynska, coach, art therapist, executive director of the “Respublica” Institute, talked to the participants about the stages of human response to the crisis and art therapy work with stress.

Ms. Oleksandra notes: “It can often be a challenge for strong people to share their difficult emotional states. However, when a person talks about their own states, they are freed from the burden, and it is much easier for them to build the future they will follow.” 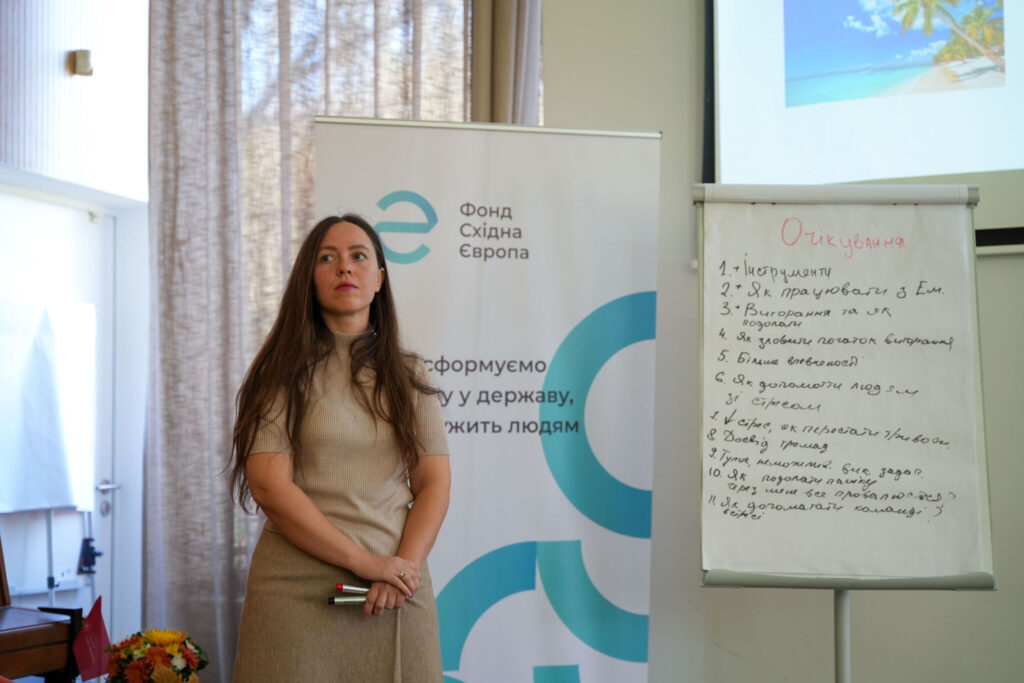 Being resilient now is also about admitting what is painful. The participants of the training shared with others through various methods of therapy: self-presentation, humour, drawing, work with emotional states, awareness of what they lost and what they gained during this period of war.

On the day of this session, the surprise at the dinner table was the common joy at the news of the liberation of Kherson. Especially for the participants from CSOs founded in Kherson.

“Our organisation “Global View” was relocated from Kherson, and we did not know where to start. The biggest challenge for this year was not the challenge, it was the tragedy – the dead. Now, at this training, first of all, we were psychologically supported”, – said the chairman of the board of the organisation, facilitator of educational programs Liudmyla Absava, – “Secondly, after the lectures, we have built a path of action for the next six months. Thirdly, I met wonderful people here and I am delighted with our public community. I understand that the war will end and we will rebuild our country, Kherson is Ukraine”. 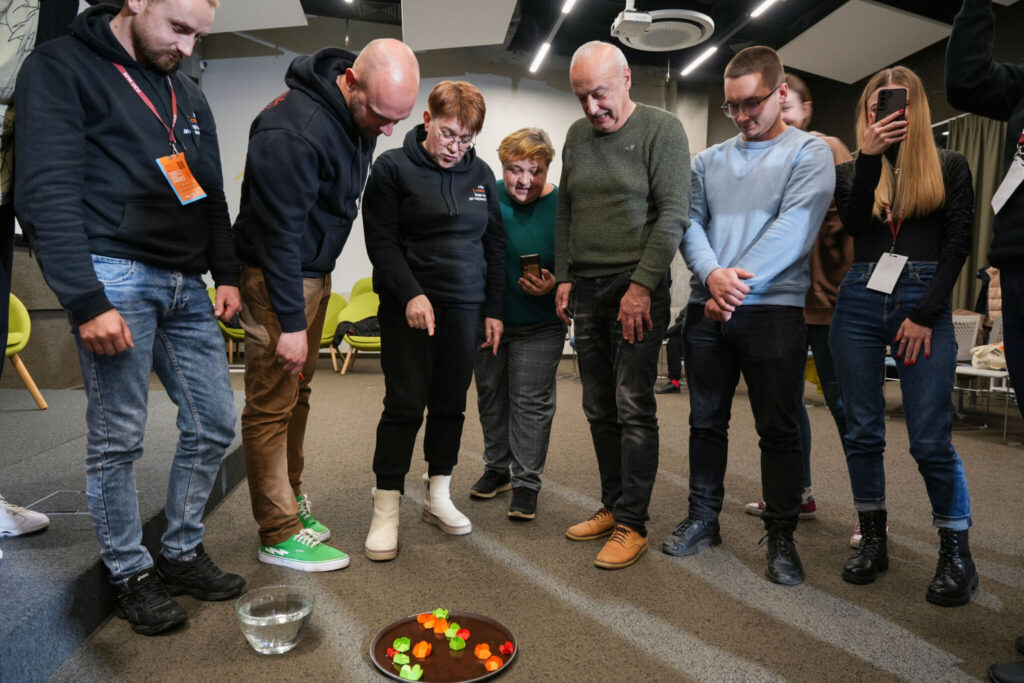 Oleksandr Avramchuk, Associate Professor of the Department of Clinical Psychology at UCU, also urged the representatives of NGOs to learn to take care of themselves: “Then you will be able to take care of other people in the team, thanks to your own experience”. 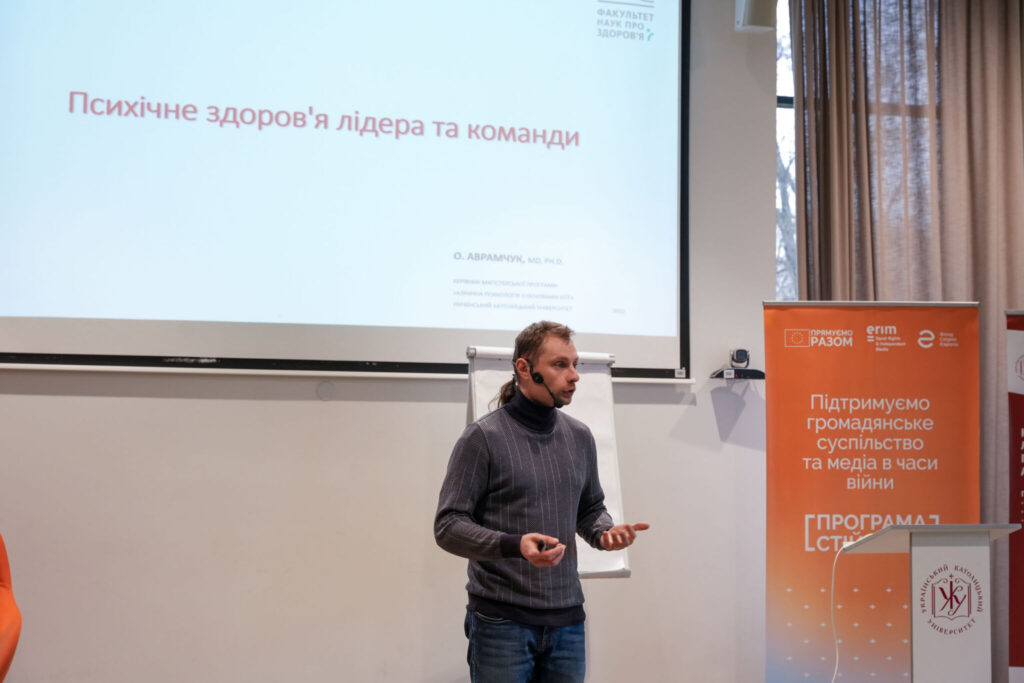 The first stage of the solution is to identify the problem

On the fifth day of the training we studied the concept of “problem” and its advocacy with Roman Kobets, philosopher and political analyst. They talked about how problems compete with each other and how to set priorities. According to the lecturer: “All decisions have certain stages. The first of them is to identify the problem”. 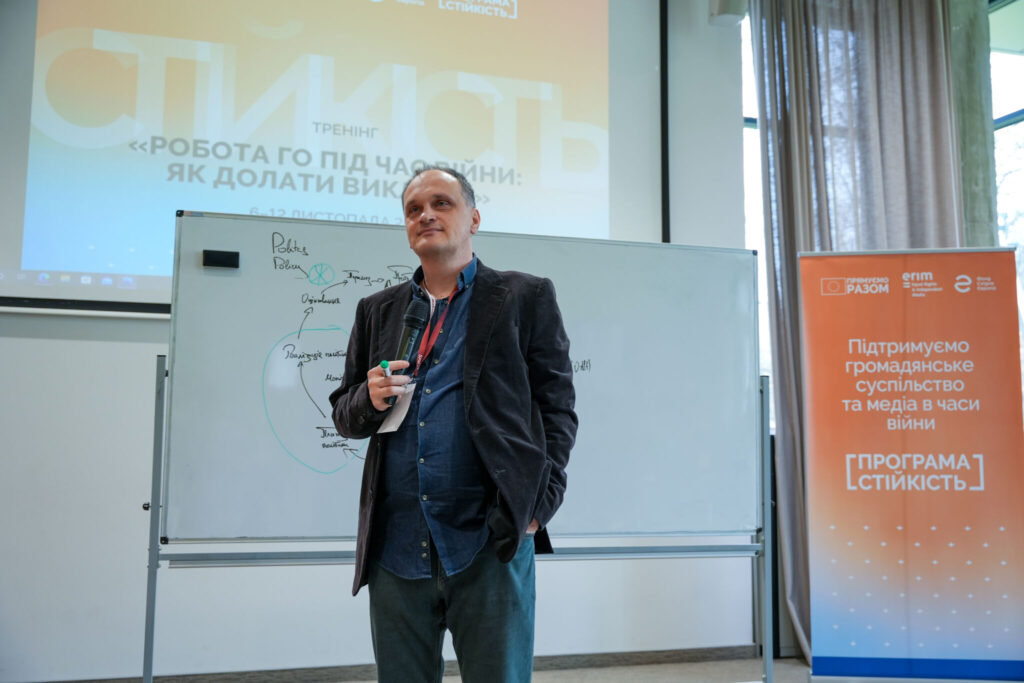 The training week ended with sessions on project management. An interesting exercise was given to the participants by Natalia Starynska, a project management consultant: some had to share their advice on organisational development, projects, etc., and those to whom these tips were directed had to listen to them and try to accept them, and not immediately go into denial. 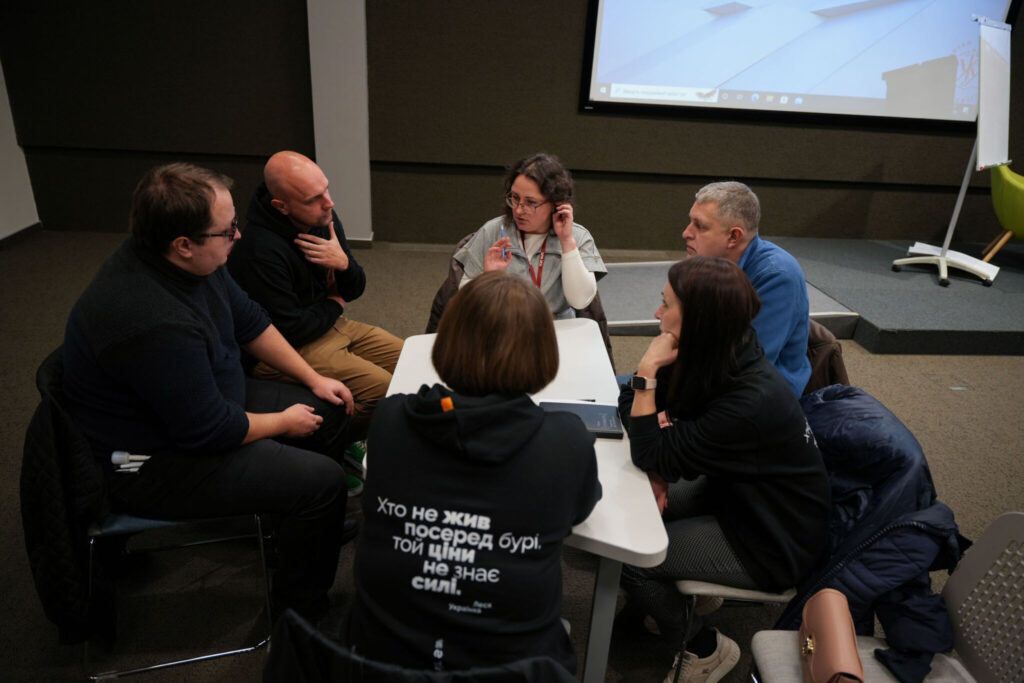 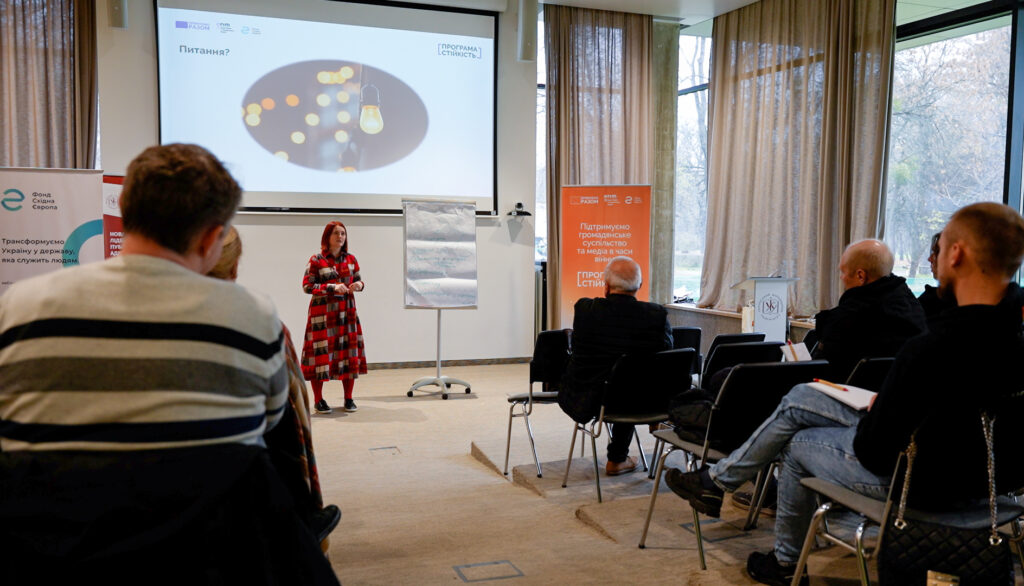 And finally – a comment from the training participant Anna Ovcharenko, Executive Director of the CSO “Media Community of Mariupol” about the challenges and sustainability for her organisation: “The biggest challenge for our CSO was to survive, to keep the team, people and give them the opportunity to do their job, because it is important for them and society – people need to know the truth.” 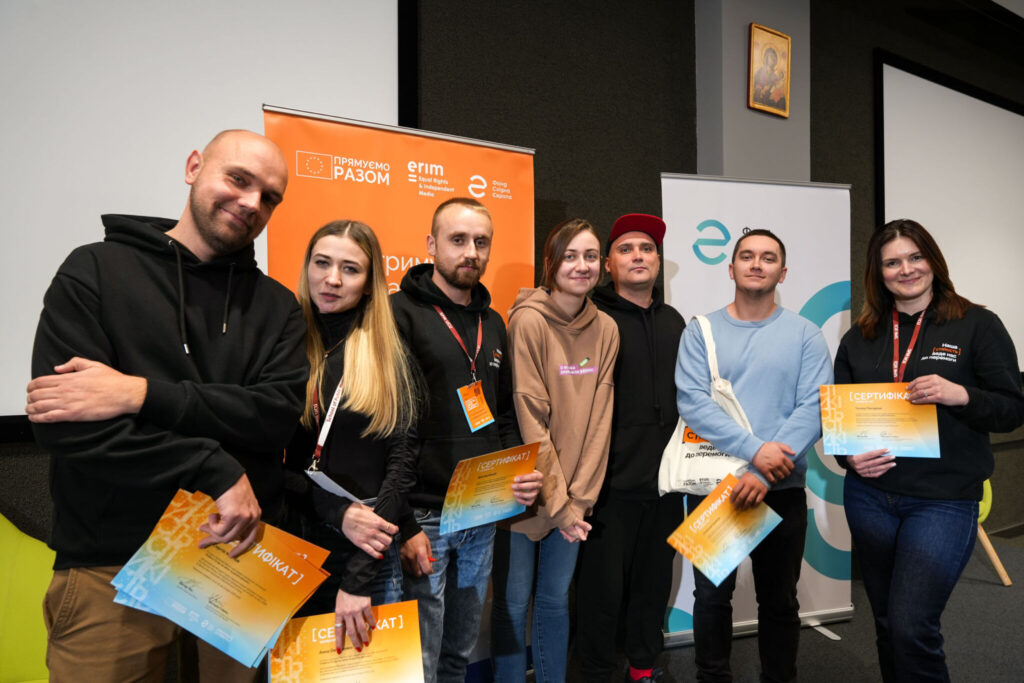 When asked what helps Anna and her organisation to remain resilient, she answers: “Faith and hope. Thanks to our inner strength, the feeling that everything will be fine, we believe in the Armed Forces, in victory, and from the CSO side we are doing everything possible to  bring this victory closer.” 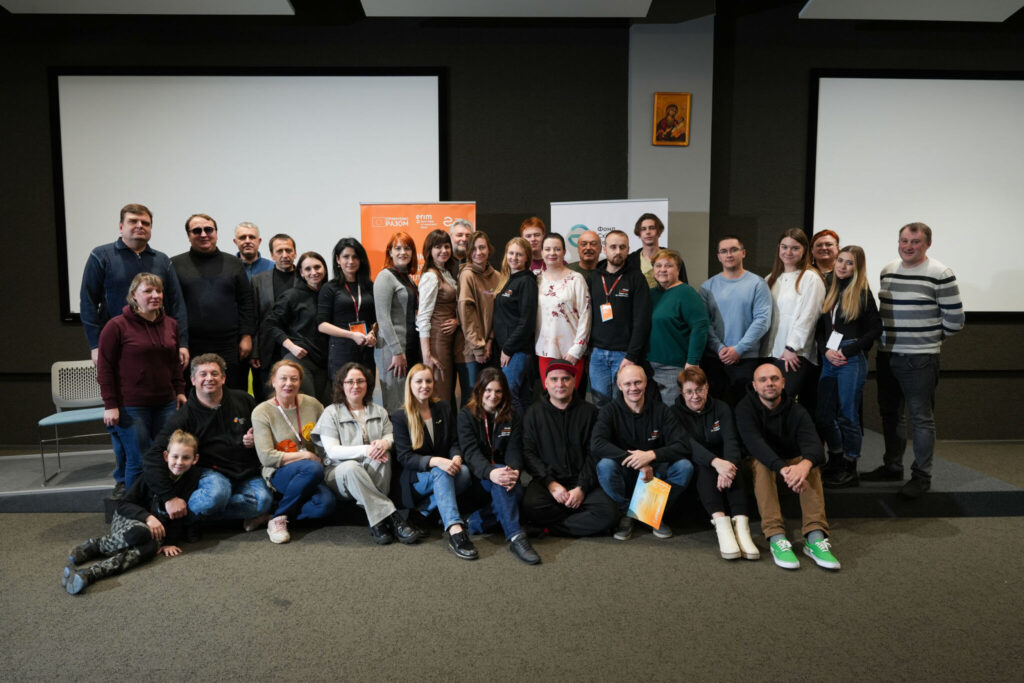 The training programme “CSOs’ work during the war: how to overcome challenges” was held within the framework of the “Stiyikist’” Programme implemented by the East Europe Foundation within a consortium of non-governmental organisations led by ERIM (Equal Rights and Independent Media, France) in partnership with Human Rights House Foundation, Human Rights House Tbilisi, the Black Sea Trust for Regional Cooperation, and funded by the European Union.