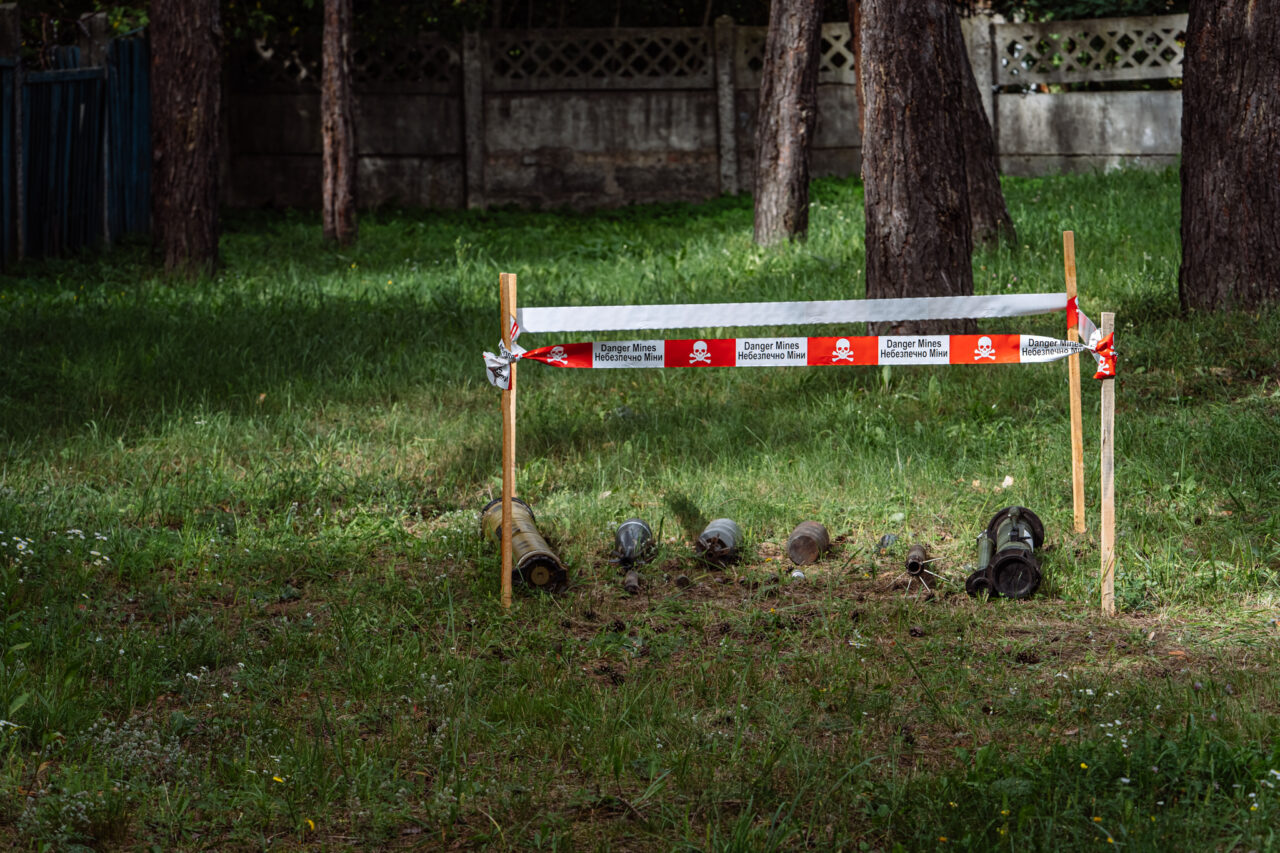 In July, the first three-day training was organized for people coming from a multitude of professional backgrounds and occupations. Each of them has got their own story and the motivation they pursued to apply for the training. Yet all of them are united by a common goal: to protect themselves and people around them from a deadly threat. Ultimately, landmine safety is not only the responsibility of special units, but also a concern for everyone living in the territories affected by hostilities, at present or in the past.

«Since the outbreak of the war, I am where it is dangerous»

Volodymyr, a realtor in Vinnitsa pre-war, joined Your Kharkiv NGO immediately following the outbreak of the full-scale invasion, driven by desire to act and to serve rather than stay in a safe place. He alone made 11 trips to Kharkiv with humanitarian aid missions for civilians and the military.

“Since the outbreak of the war, I am where it is dangerous. In the wartime, I got to know Kharkiv city really well. Around me, shells exploded many times… The training on explosive ordnance was very useful for me. Many things that I had not paid attention to before turned out to be dangerous. The training course covered fundamentals of explosion protection really well,” says Volodymyr.

Before the war, Serhii was a lawyer and Yurii was an entrepreneur. Now they are part of the Volunteer Unit created by Myronivska Amalgamated Territorial Community (ATC).

These men came to the training because in their community, in Kyiv region, there are no professionals in this field who can teach them the basics about explosive ordnance. Thus, they are learning in order to be able to tell other people about landmine hazards. Ultimately, the enemy could have left ‘traps’ everywhere.

“The training was very useful, and our trainers were really great. Some of them are coming from the military background, and some of them worked to clear landmines in the war hotspots. It was very interesting, they explain everything very professionally… We recommend all of you to take this training. Especially people in the Kyiv and Sumy regions,” says Serhii.

“Now we know how to help with burns or limbs torn off. We have got first aid kits. We know exactly what we have to do under the procedure, and it is important, because every minute counts,” says Yurii.

Anton Putria, a tutor working at the State Emergency Service Training Center for pyrotechnicians, also shared some stories from his practice. He told a story when a child in the Kharkiv region found a mine on the river bank dating back to the World War II and brought it in his hands. Luckily, it didn’t explode.

“In the Dnipropetrovsk region, children found an explosive item and started throwing it back and force, and consequently it exploded in the air… Another story from the Kharkiv region: a man got an explosive item from children and threw it into the fire, and it detonated. Under no circumstances should you do that,” says Anton.

Explosive ordnance represents the highest risk for children. Mines may be brightly colored and look like toys. Children find them and want to play with them. Hence, for every Ukrainian, it is so important to know how to identify a threat and what to do when a munition is found. You need to talk about this with children and share information with your loved ones.

“If we take international statistics, since 2014 Ukraine has risen to the top five countries of the world by size of its mine-contaminated areas. And that was only due to situation in Donbas. And what can we say about it now? Every day, deminers find and remove between 1,500 to 2,000 munition pieces found throughout Ukraine,” says Anton Putria.

The trainings conducted as part of the “Watch Your Step!” and “Spilnodiia” Programs, which are implemented by East Europe Foundation together with the State Emergency Service with funds from the European Union and DanChurchAid.